March 12: The First Meal After the Earthquake/Individually owned stores 01 ”I lost someone I loved and didn’t care about what I would eat.” 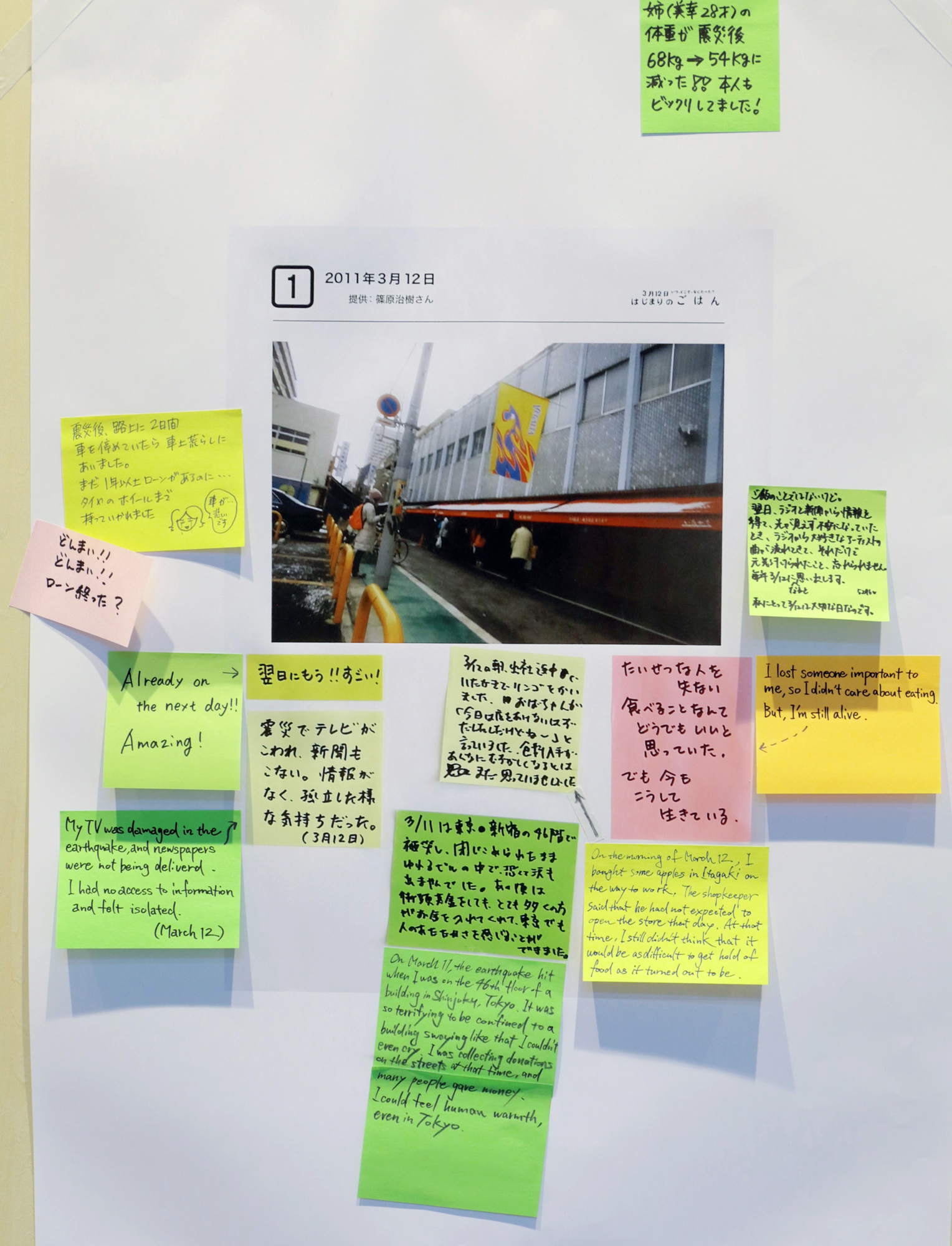 *On the panels with sticky notes from the [Fall 2014] exhibition, visitors added their own comments.
*Sticky notes written in English are translations of the Japanese text indicated by the arrow.

▷Already on the next day!! Amazing!

▷My TV was damaged in the earthquake, and newspapers were not being delivered. I had no access to information and felt isolated. (March 12)
▷On the morning of March 12, I bought some apples in Itagaki on the way to work. The shopkeeper said that he had not expected to open the store that day. At that time, I still didn’t think that it would be as difficult to get hold of food as it turned out to be.
▷On March 11, the earthquake hit when I was on the 46th floor of a building in Shinjuku, Tokyo. It was so terrifying to be confined to a building swaying like that that I couldn’t even cry. I was collecting donations on the streets at that time, and many people gave money. I could feel human warmth, even in Tokyo.

▷I lost someone important to me, so I didn’t care about eating. But I’m still alive.

▷My older sister’s (Miyuki, 28 years old) weight dropped from 68kg→54kg after the disaster!! She was really surprised!

▷After the disaster, I had been parking my car on the street for two days, and someone broke in and stole from my car. I still had a year of loan payments…but they even took the car wheels. My car… I’m saddened.

▷Cheer up!! Cheer up!! Did you finish the loan payments?

▷This comment is not about meals, but on the next day, I got information from the radio and the newspaper. I could see no light at the end of the tunnel and felt anxious. That was when I heard my favorite artist’s song from the radio, and just that made me feel energized. I could never forget that. I remember it every year on March 12th. For me, March 12th is a special day. 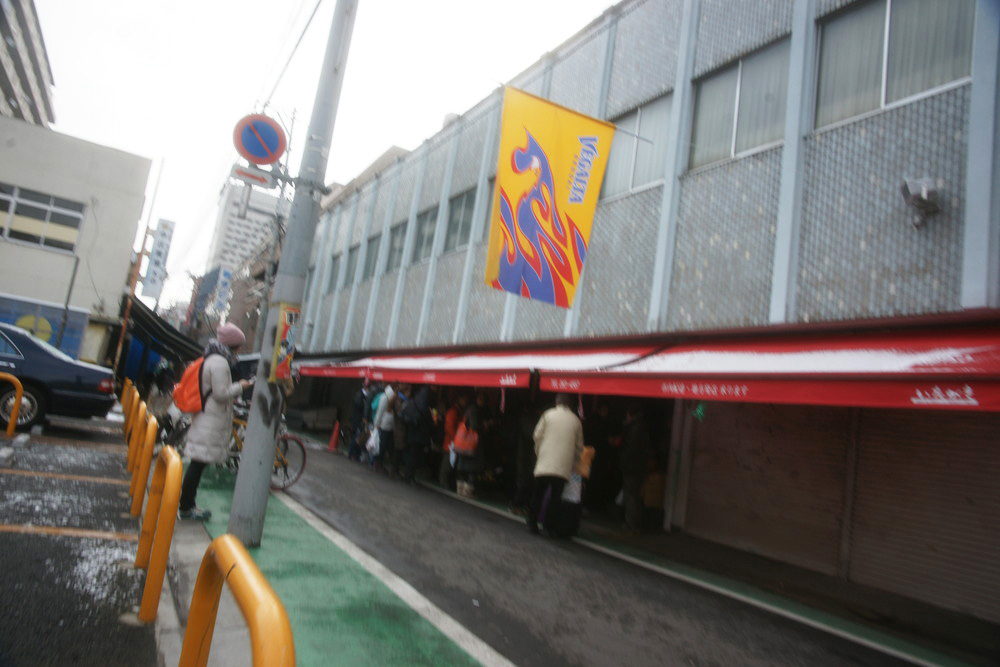 You can read the episode of this photo and the record keeper from the following page.
[Photo and Article] A Look into the Lives of Citizens at the Heart of Sendai City 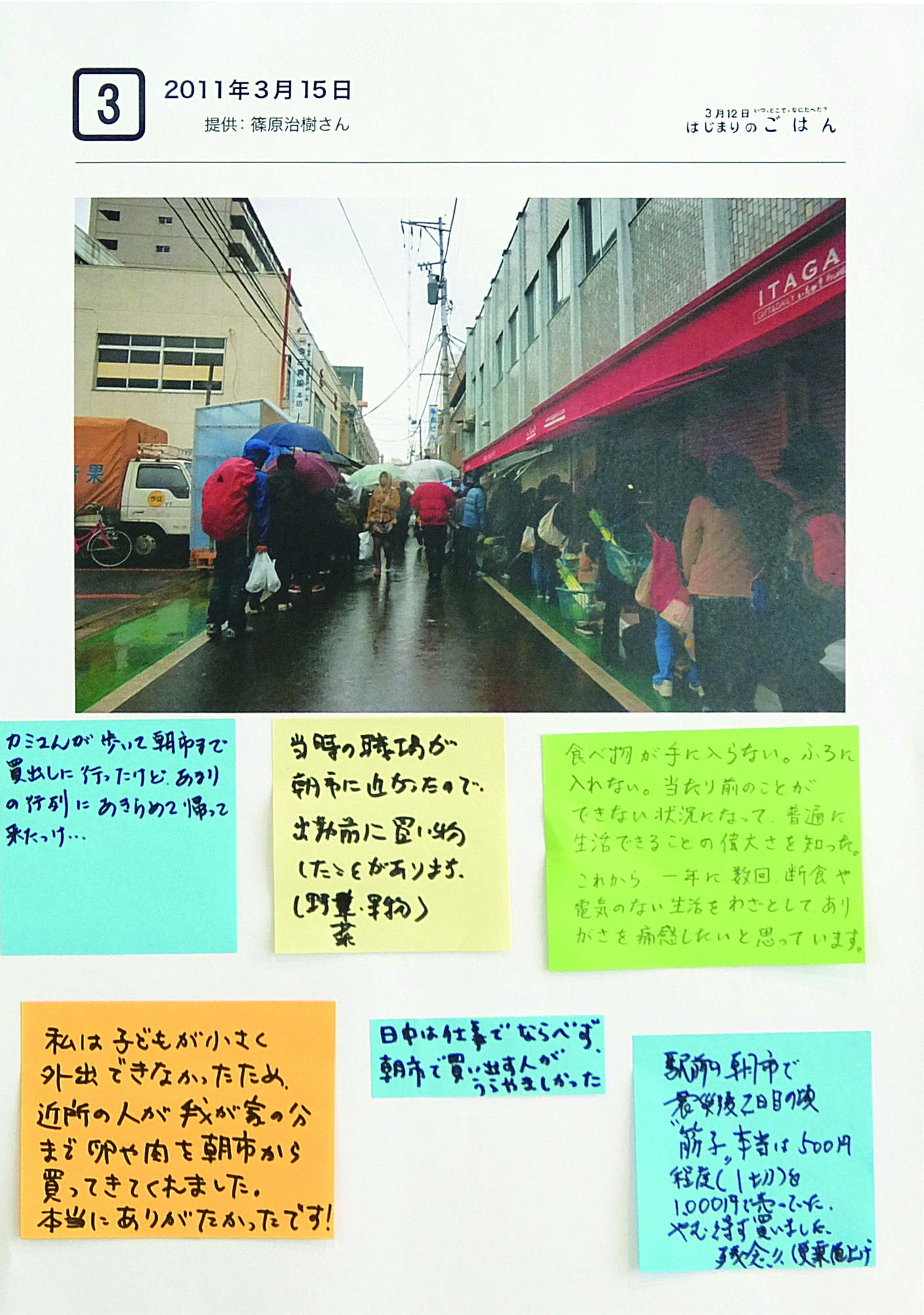