March 12: The First Meal After the Earthquake/Preserved Food and Relief Supplies 11 “Candles on the wedding cake we stored for over 20 years, ←the gigantic ones!! They did an amazing job. Our bond as husband and wife was revitalized!?” 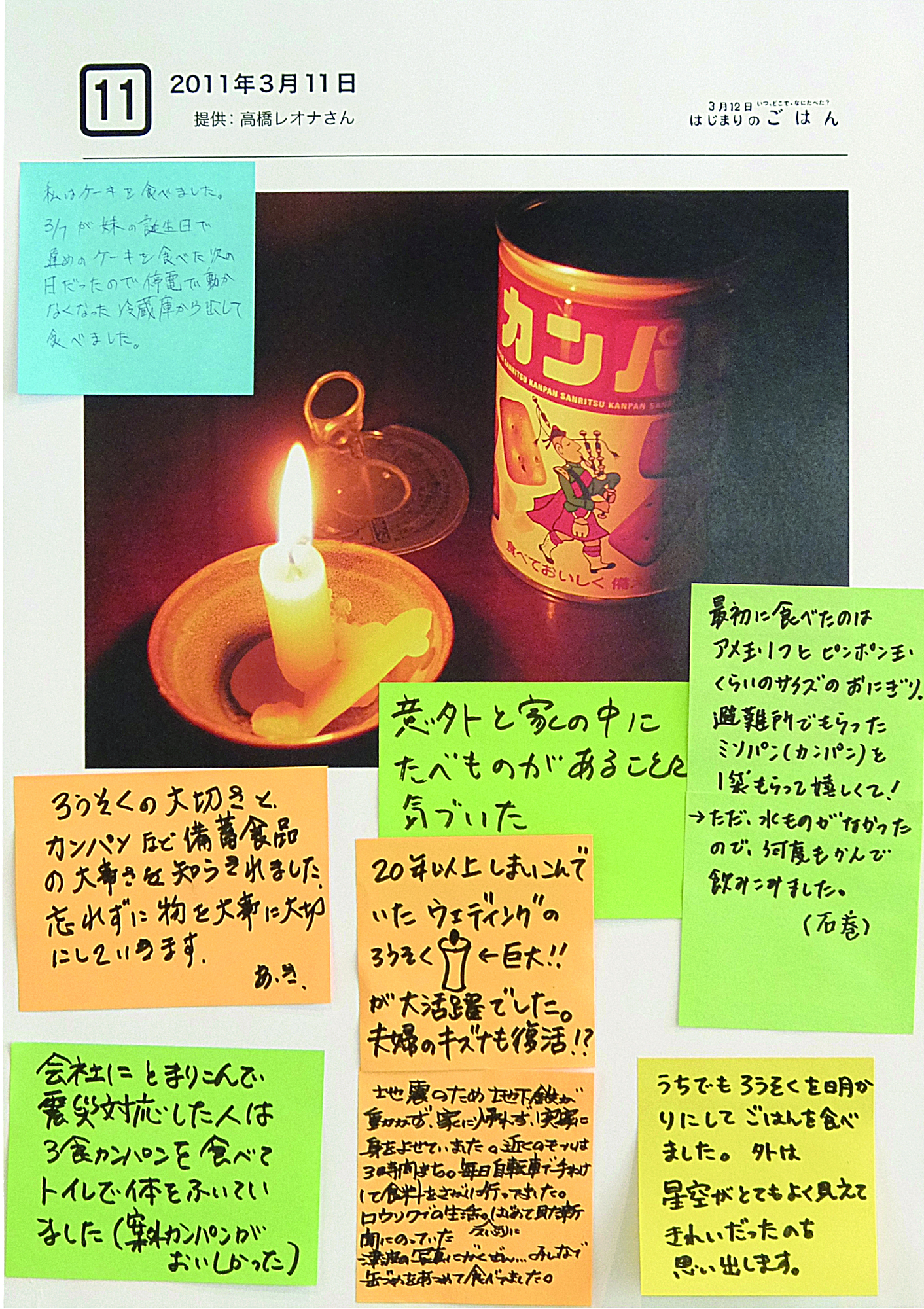 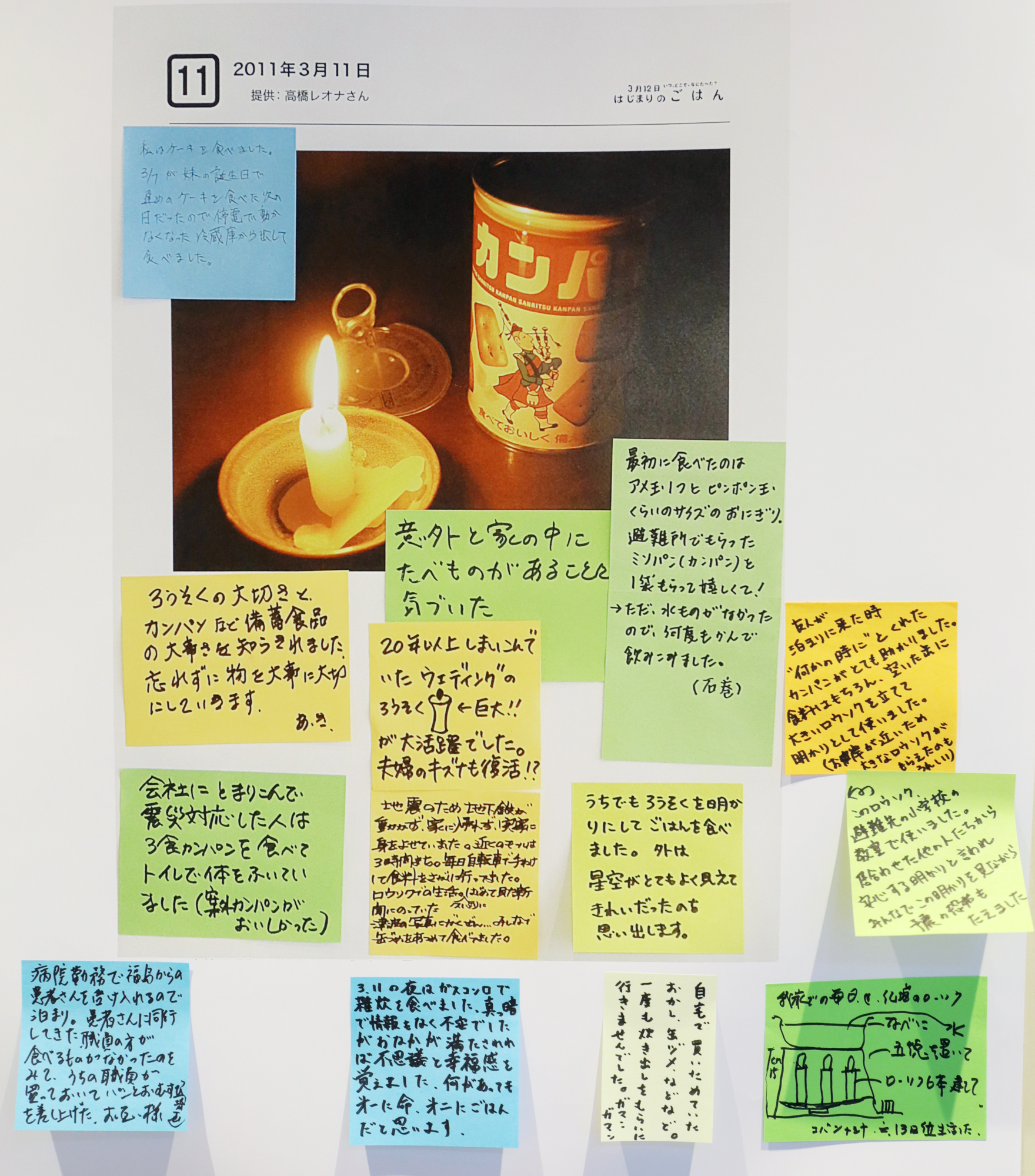 *On the panels with sticky notes from the [Fall 2014] exhibition, visitors added their own comments.

▷I had some cake. March 7th was my younger sister’s birthday, and we ate cake a while after her birthday. This was the following day, so I ate the leftover cake out of the fridge that stopped working due to the blackout.

▷It made me realize the importance of having candles and food stock like hard-dry biscuits. I will remember to keep these things safe. Asa

▷People who stayed at the company overnight to deal with the disaster ate hard-dry biscuits for all three meals and had to wipe and clean themselves in the washroom (Hard-dry biscuits were surprisingly delicious).

▷I realized that there was more food in the house than I thought.

▷Candles on the wedding cake we stored for over 20 years, ←the gigantic ones!! They did an amazing job. Our bond as husband and wife was revitalized!?

▷Because of the disaster, the subway had stopped working, and I couldn’t go home, so I stayed at my parents’ house. There was a three-hour wait at the shopping mall nearby, and every day, we went separately to go look for food. We lived using candles. When I saw the newspaper for the first time in a while, I saw the photos of the tsunami, which made me stunned…we gathered canned food together and ate them.

▷The first thing I ate was a piece of candy and a rice ball the size of a ping pong ball. At the shelter, I received a bag of miso-pan (hard-dry biscuits), and I was so happy! →Still, there was no water, so I had to chew it many times to swallow it. (Ishinomaki)

▷Our house also used candles as the light as we had meals. I remember we could see the starry sky outside really well, which was beautiful.

▷I was working at a hospital, and the hospital was accepting a patient from Fukushima, so I stayed overnight. The staff who came with the patient didn’t have anything to eat, so I gave bread and rice balls that our staff had bought. What goes around, comes around. (Saitama)

▷At night on March 11th, I used the gas stove to cook porridge with some ingredients. It was pitch-black, and I had no information, so I felt anxious, but feeling full somehow made me feel happy. I think, whatever happens, the first thing you need is life, and the second thing you need is a meal.

▷I ate snacks, canned food, and other food that I had bought and stocked at home. I never went to receive an emergency meal. Endure, endure.

▷My friend had given me some hard-biscuits during a stayover “just in case,” and that helped me so much. Other than the food, I put a large candle in an empty can and used that as the light. (It was nice I received a large candle as Ohigan was coming up.)

▷I used this candle in a classroom of an elementary school we took shelter in. Other people that were there said this light made them feel at ease, so we all looked at this light and endured the fear of aftershocks.

▷(An illustration of a candle warming up a pot) every day, our house placed candles from the Buddhist altar, pot, water, and a stand (gotoku). I placed six candles and put plates and an oval tray + soup, and we lived like that for about 13 days. 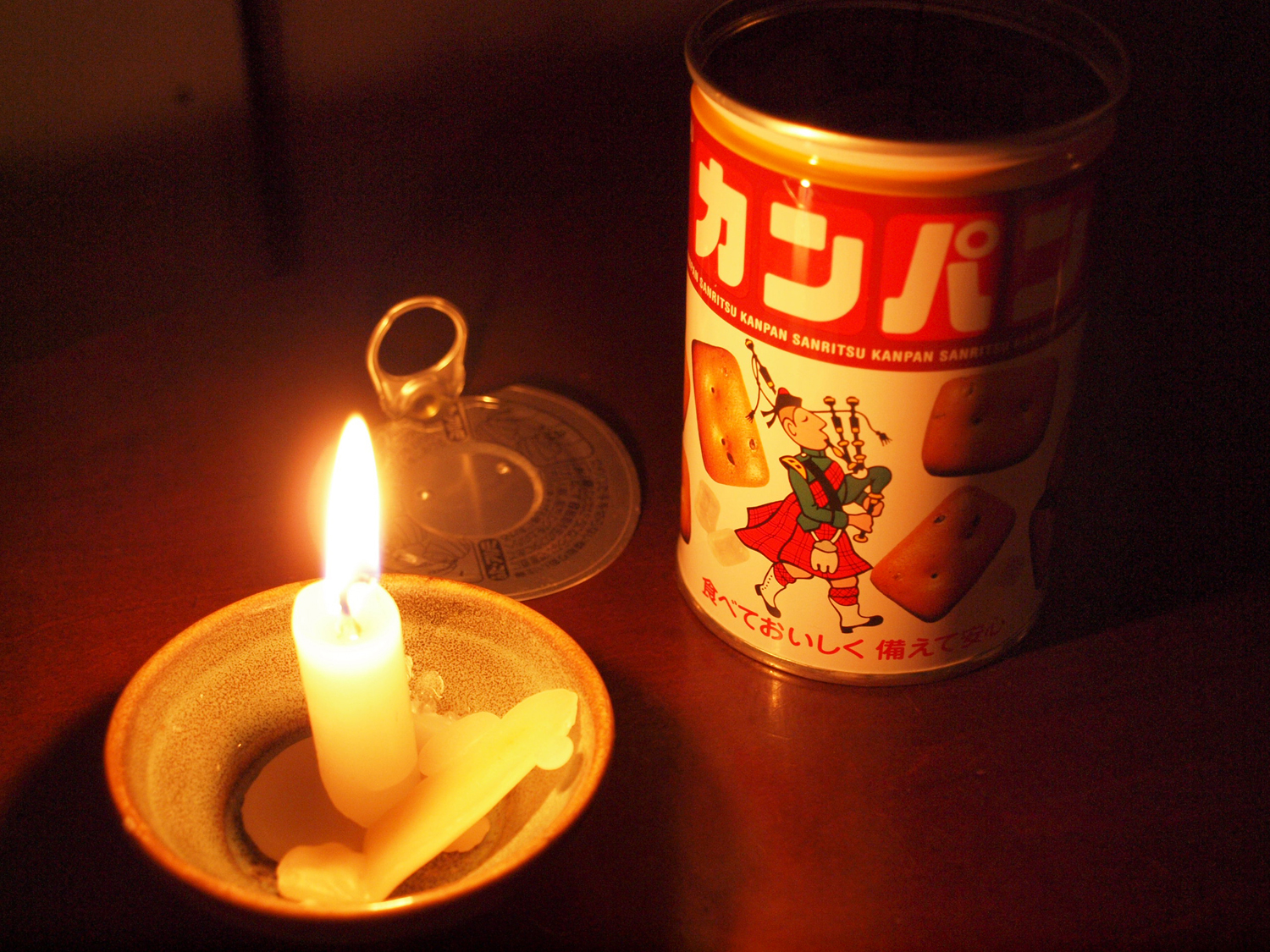 You can read the episode of this photo and the record keeper from the following page.
[Photo and Article] A Look into Sendai City from March 11th to April 10th 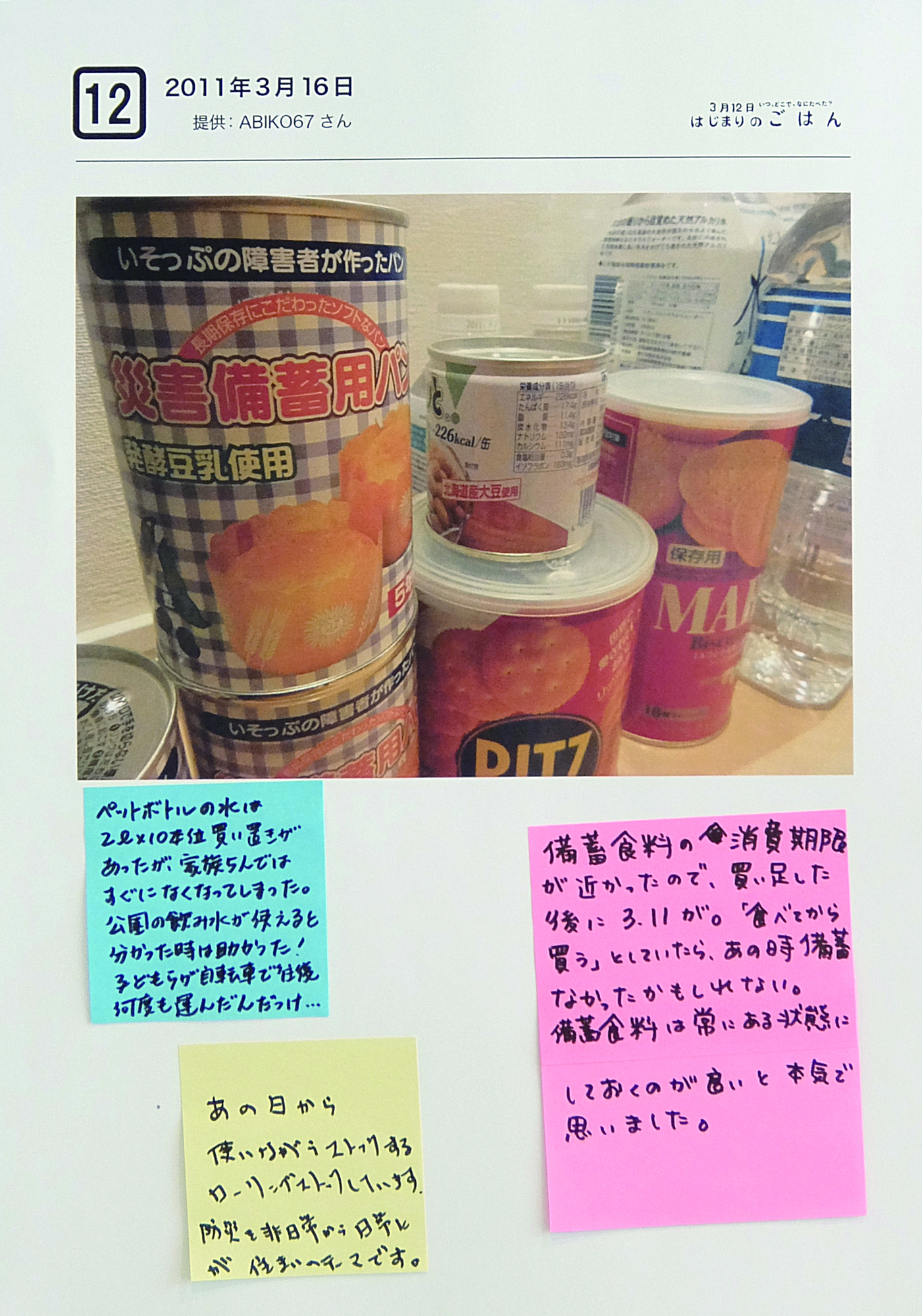 March 12: The First Meal After the Earthquake/Preserved Food and Relie.. 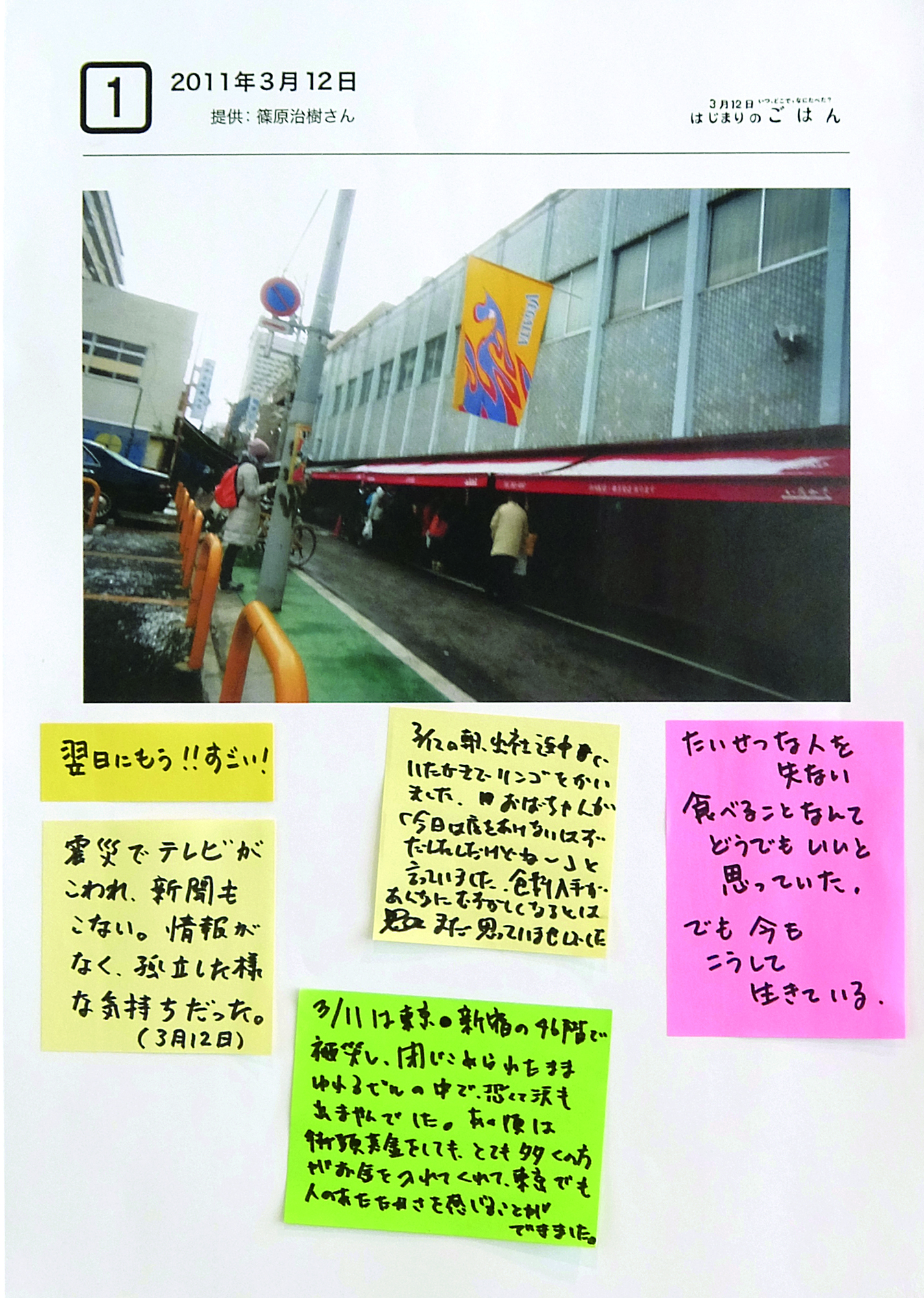 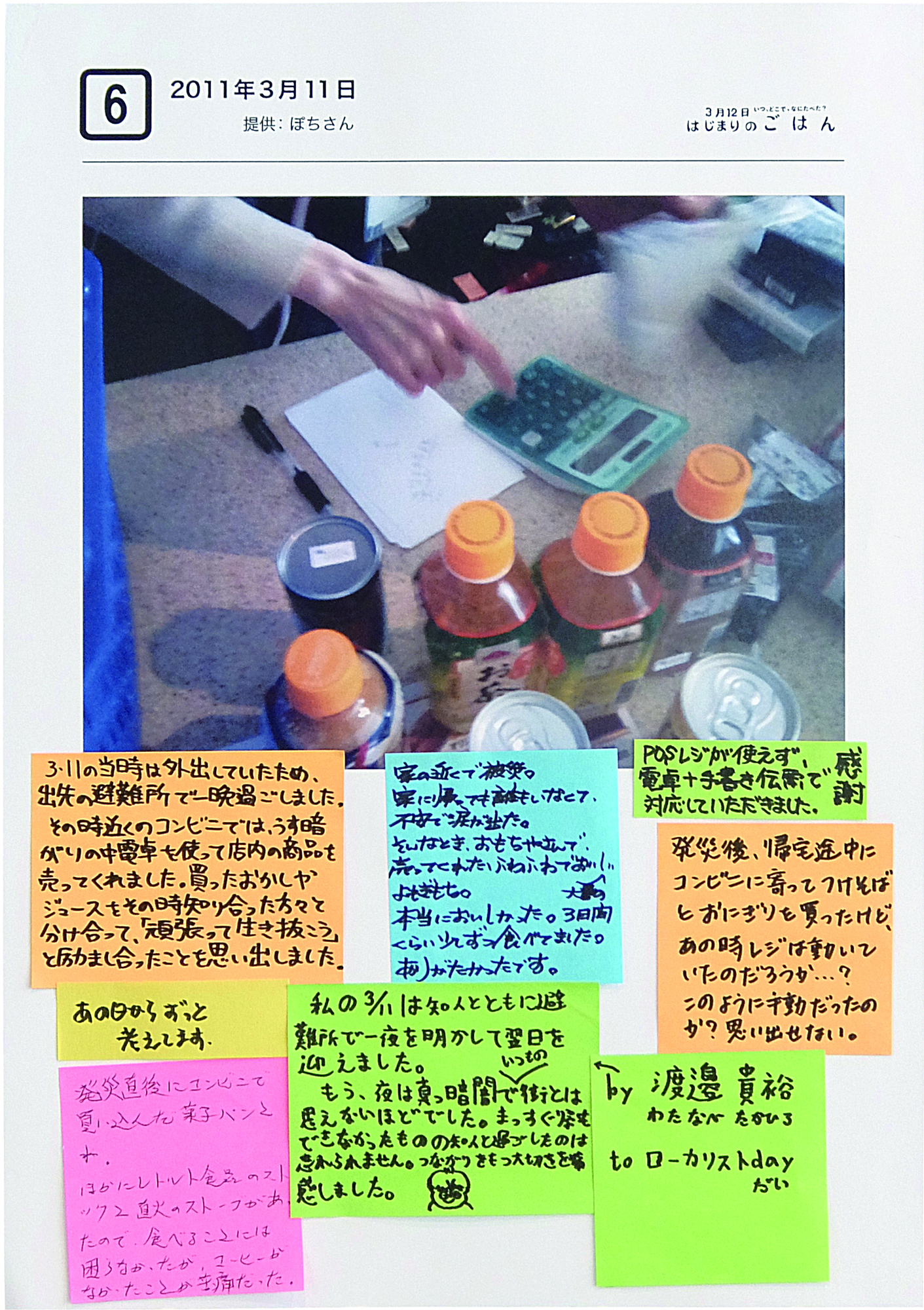